A previously hidden discovery of great historic and cultural importance is emerging from behind layers of white plaster in a private residence next door to the great 16th century Mouassine mosque built when the Saadian dynasty made Marrakech their imperial capital. Marrakech became one of the great cities in the Islami c world with a population of perhaps 50,000. The major projects of the dynasty including the mosques at  Mouassine, Bab Doukkala, Ben- Youssef  and  Sidi Bel -Abbes  gave the city a new dynamic.The Saadians initiated a grand building program and moved the Jewish population to the Mellah and distributed land to Chorfa families so they could occupy the area.

Between the mosque and the Mouassine fountain an archway leads into a small street, the Derb al Hammam alongside  the great wall of the mosque . The area is undergoing major restorative work. There is  a massive entrance door into the mosque on the right hand side and on reaching the Douiria you find a small entrance “the Saba”.  The open doorway reveals two  internal doorways.

On the left, stairs lead up to the douiria which was a guest apartment and the other door leads in to the house and the hammam  which gives its name to the street. The guests were given an honored place separate from the domestic life of the house. The Douiria in its restored form is an important commentary on 16th century Moroccan social history the courtly art of hospitality for honored guests who were housed so close to the mosque. 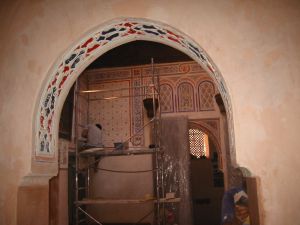 As you enter the apartment you come into the central room, a lounge which has two seating areas  facing each other crowned by carved wooden designs and  an intricately painted ceiling. On either side two rooms face each other . They could have been a bedroom or sitting room.  Four large panels in the central lounge repeat floral patterns in a set of three colors: green, red , yellow. The completed restoration will reveal a symphony of color.

The room behind the hall has a wooden ceiling decorated with a sun design. The walls and pillars with stucco decoration reveal brightly colored designs the ” testir ” geometric tracery radiating around a central star called ” the cobwebs of the Prophet é. The ” touriq ” ornaments represent leaves and the sculpture, a  ” honeycomb ” of wood , stone, or plaster, repeating a pattern called mqarbes.  Plasterers or “guebbassa ” could generally read and write. The effect suggests an ornamental garden. .

Patrick Man’ach  and Hamid Mergani of the Maison de la Photographie  in Marrakech and the Berber Ecomuseum  Dar Tafza near Ourika bought the Mouassine  Douiria in December 2012 and the restoration work is supported by friends including  Xavier Salmon, of the Louvre museum in Paris,  Hugo van Tilborg, Bruno Biker,  and Peter Mestralett.

This apartment was inhabited from 1954 to 2013 by a family from Marrakesh, who concreted the floors and put layers of white plaster over the walls and ceilings which actually helped to preserve most of the decorative motifs and ornamentation underneath. 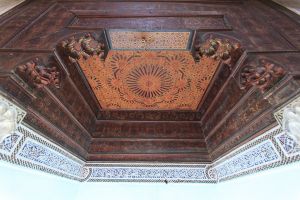 When they acquired the douiria, rain was falling from the terrace, toilets had destroyed some of the  stucco. They could not see the ornamental details but what was visible was the wood elements, the doors, and ceilings. The walls were covered with water paintings. They completed tests in different parts and found that  under the painting was a layer of white plaster, and another layer of painting and  a further layer of 6 cm. of white plaster. Underneath this they found the original pink plaster which covered the walls.

They painstakingly removed the layers of white plaster and the interior of the douiria began to change as various ornamental features were revealed giving a subtle variation and lightness to the decor. They discovered that the original pink pigment layer on the walls was intact.

They had to consider the right process to clean the pigments and preserve them.  They also had to avoid using any water in the process as this could damage the pigments. Water, on cotton, was used to remove the white plaster layer and reveal the original delicate pink on the walls.

This cleaning process was particularly important in the chamber at the back of the Douiria adjacent to the mosque wall. Two columns of white plaster stretching up to the ceiling were covered with paintings. Following the careful removal of the white plaster tests showed a motif of pink plaster, and an elegant motif probably from the early 17th Century, the period of  Sultan Moulay Ismail.

Patrick Man’ach and Hamid Megrani  decided that the douiria had to appear as it was,  as the quality of its preservation was exceptional.  Elements would only be added where, there absence would present a problem in the general appearance  of the apartment in its original form.

They selected two young expert potters  from Dar Tafza, in the  Ourika valley who understood what needed to be done during the restoration. Xavier Salmon stayed some weeks in the douiria to complete the tests and understand the details. He transmitted his passion for the restoration process to the young craftsmen. A total workforce of ten men was selected.

They uncovered and completed  restorations on the terrace , removed the surface layer  and checked the wooden beams. If the beams were in bad condition, they were replaced. They cleaned all the “dead earth” the mud which had fall over the reverse side of the décor up to one meter or more. There is a vacuum between the décor ceiling and the beams supporting the terrace floor. The structure of the walls was checked and carefully repaired. Inside aeration was reintroduced systematically in the construction, to guarantee the ventilation in the spaces.

On the façade, they had to pull down a heavy layer of cement, repair the façade with original old bricks and they found a beautiful portico and remains of pink stucco. After some weeks of intervention, the façade appeared in its simple, elegant  perfection.

Inside, they had to cover the wooden doors and eliminate the cement floor of the patio. Then they discovered the three cupolas of bricks for the ground floor hamman. The beams supporting the inner walls were in a very bad condition: it was a very delicate operation to cut them in pieces, remove and replace them. The complete structure of the douiria was isolated from humidity and direct water. Toilets and septic tanks were removed.

A systematic sequence of photography was introduced to cover all steps of the restoration. Students of the Ecole d’Architecture de Marrakech visited the Douiria regularly and were introduced to the concept of patrimony.

The doors and wooden ceilings were left untouched.  Nothing was done to the colors except careful cleaning and nourishing of the wood.

The pigments were intact and nothing was added. The original pink plaster was repaired using gypsum from a gypsum quarry in the Ourika valley .The gypsum stones were heated in an oven and  filtered resulting in excellent quality stone which was used to repair the pink layer of plaster when needed.The restoration is still in process with a workforce of ten men . The next period  of restoration will be consecrated entirely to cleaning the pigments.

They have approached UNESCO  via  Mr. Abdelghani Tayyibi Director of the National School of Architecture in Marrakech and Delegate UNESCO Chairman for Morocco to obtain the UNESCO  designation or title as a Masterpiece at Risk. The designation would help those who wish to restore and revive buildings at risk. Morocco does not have the legislative or regulatory apparatus to qualify a building as a ” masterpiece at risk” and what qualifies a building for such a category.  Architectural agencies which can respond to the ancient architectural considerations are also still lacking. Many buildings of various sizes, could benefit from obtaining this qualification, and the government would then have an additional means of action to initiate restoration projects.

One wonders what other hidden treasures exist under layers of plaster in other properties in Marrakech’s medina. Marrakech can only benefit by more such discoveries that can be put on public display. Morocco’s turbulent history has meant that much from earlier generations was destroyed.

Apart from the magnificent Medersa Ben Youssef so much of Marrakech’s Islamic art treasures are hidden from view and non believers are not allowed to enter religious establishments. Hopefully one day this may change for a few of the older mosques and zaouias.

When the restoration work on the Dar El Hammam Douiria is complete it is planned to open it to the public and to mount high level art exhibitons there. If you want to visit the Douiria in Marrakech contact the owner at www.douiria.org

Rue Laksour and The Mouassine, Gateway to the Marrakech Souks

Top 12 Things to Do in Morocco