Having won many battles and ensuring the unity of what became the modern Moroccan state, he returned to build Meknes as his capital over a period of 55 years. Moulay Ismail was not one to do things by half measures. The old town of Meknes had been the capital of a Berber tribe which had come from Tunisia, the Mekanassa. Alongside this old medina town the Sultan built his imperial city which provided accommodation for his wives and some 500 concubines and 800 children with 24 royal palaces, mosques, barracks and ornamental gardens, surrounded by four sets of massive defensive walls .

The Sultan also installed his army of black soldiers, the Abids or Black Guard, which grew to a force of more than 25,000 in number during his reign in Meknes. He used this slave army to impose a centralized state instead of using unreliable Moroccan tribes to enforce his rule as other sultans had done before him. He created a huge complex, which you can still see, for storage facilities and stabling for thousands of horses at the Heri el Souani granary. He used 50,000 Berber and European slaves to build the imperial city. He plundered the roman remains of Volubilis and completely removed the interior of the Badi Palace in Marrakech to build his imperial city.

Despite his iron control during his reign he failed to ensure the succession. Shortly after his death his sons dismantled most of what he had built within the walls and removed the materials to other locations following a pattern repeated in Moroccan history up until the French Protectorate and conservation efforts following Morocco’s independence in 1956. 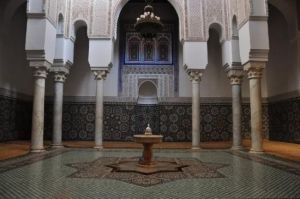 Meknes has some remarkable entrance gates or babs, the best known and most ornate is the Bab Mansour, embellished with zellij tiles and Islamic script engraven on stucco. It is at Place el Helim which separates the Medina from the Imperial city and the nearby Bab Jema en Nouar ,both designed by Moulay Ismail’s court architect, a Christian renegade known as Mansour el Aleuj. The Dar Jamai Museum overlooks the Place el Helim and is a former palace built in 1882 for the Jamai family, two of whom were viziers to the sultan. Since 1920 it became one of Morocco’s best museums displaying the work of urban craftsmen and traditional Berber tribal artifacts. Its exhibits include ceramics, antique Fes and Meknes pottery, Berber jewelry, rugs, kelims, antique carpets, embroidery and woodwork. You can also enjoy the greenery and fountains of the museum’s Andalusian garden . Upstairs the vizier’s salon is arranged as a typical 19th century palace reception room with period decorations and furniture.

Opposite the Grand Mosque is the Medersa Bou Inania, a Merinid Medersa ( Islamic college) built in 1358 by Bou Inania ,who also built the renowned Medersa of the same name in Fes which is much larger. The medersa has fine zellij tiles, delicate stucco relief work and a carved olive wood ceiling. You can climb up to the roof for a fine view of the green tiled Grand Mosque and its minaret. The medersa itself is closed to non muslims.

In the Imperial City the tomb of its founder Sultan Moulay Ismail remains and is open to non muslims. It has courtyards which lead to the tomb hall which is finely decorated with zellij tiles and crafted stucco decorations. You can view the tomb but should not advance in to the chamber which is visited by pilgrims.

Moulay Ismail’s parade ground, the mechaouar, for reviewing his troops, is now called the Place Lalla Aouda and lies to the south of the Bab Mansour . The Koubbba al Sufara further on, is where the sultan received ambassadors and stairs lead down to a large crypt with dark rooms which are said to be dungeons but were apparently for storage.

The medina is smaller than that of Fes or Marrakech but nevertheless has good souks for jewelry, textiles, carpets and kelims. For accommodation you can choose riads in the medina including Riad Yacout or Riad D’Or and the Ville Nouvelle has a number of hotels including the Ibis and the Transatlantique. If you fancy a drink there is Le Pub and there are a number of restaurants in the medina including Dar Sultana and Restaurant Zitouna and in the Ville Nouvelle, such as Chez Phillipe and the Bistrot Art &amp; Wine Bar. Meknes is a good place to stay whilst visiting the nearby Roman ruins of Volubilis with its famous mosaics and the religious pilgrimage town of Moulay Idris.

As well as being famous for its ramparts Meknes and the region is also a major agricultural centre and is home to the famous vineyards of Celliers de Meknes at Chateau Roslane which produces many fine Moroccan wines. Ask your travel agent to arrange a visit.

For More Information on Meknes Tours and Attractions

How to Design Your Own Moroccan Kaftan