Morocco is such a melting pot of cultures and identities. The Berbers (or Amazigh; plural: Imazighen, meaning “free men”) were Morocco’s indigenous peoples, settled in the north-western corner of Africa across modern-day Morocco, Mauritania, Algeria and beyond, long before the arrival of Arabs from the East in the 7th century.

The beach resort city of Agadir – known for its golden sands and luxurious beachfront resorts – is also the capital of the Souss-Massa-Draa region. As such it is a bustling hub for traders and farmers of the region as well as tourists. Traveling inland from Agadir, the road towards Taroudant and the Anti Atlas mountains traverses the fertile flood plains of the Souss and Massa rivers. This area is one of Morocco’s prime agricultural regions. Protected by the Anti Atlas Mountains from the harsh climate of the Sahara, and fed each spring by melt water, these plains are one of Morocco’s main breadbaskets.

This is not to say that life is not harsh for the sedentary agriculturalists of the Souss and the Anti Atlas. For centuries, these regions have been the source of large migratory flows to Moroccan and European cities as young men sought to better their circumstances.

Given the precarity of life, the irregularity of the rains, and the risk of attack, the local Chleuh Berbers developed a means to store their wealth – most often in the form of cereals but also important legal documents and gold or silver brought up through the Sahara and perhaps offered as a dowry.

Communal granaries – often fortified – were constructed in pisé (rammed mud) in hilltop villages to store such items. Made from the local earth, an agadir (as they are known in the local Berber Dialect, Tashelhiyt – the plural is igoudar) is an organic structure and often visually almost indivisible from the local environment. Inside, each tribe or family would have their own compartment, locked with an elaborate wooden or metal key. Compartments were stacked on top of each other, some requiring a wooden ladder to gain access. Villages were often inhabited by just a handful of families, so there was a collective motivation for the protection of the agadir and a guardian would be appointed.

Barley could be stored for up to 25 years. Almonds could last up to 20, and argan nuts – oil-yielding nuts indigenous to the area – for up to 30 years. Honey, ghee and oil stored in terracotta or glass jars would also last several years.

The agadir was also a means of defence. Tribesmen would store their arms inside and women, children and even livestock could seek protection in the agadir’s central courtyard in times of siege. In peaceful times, strategically placed igoudar could profit from passing camel trains as places of shelter and trade. Some agadir featured communal services such as a small mosque, a council chamber or a blacksmith and so are seen as an early form of urbanisation of the Berbers. In this way, over time the agadir mutated into the ksar (castle, the Berber word for which is agherm).

The routes between the main Anti-Atlas cities of Taroudant, Tafraoute, Tata and Tiznit make great road trips – each is different and fascinating in its own way. This area, however, is also prime agadir-spotting territory. A few have been restored, some are even signposted. But for the most part, these structures are hidden, neglected and sometimes even in ruins. A local guide can locate them and find the key-holder. Villagers are often pleased that outsiders express an interest in their indigenous culture. The area around Igherm (a key crossroads between Tata or Tafraoute and Tardoudant) is particularly rich in this aspect of Berber built heritage, but the igoudar are often hard to find and may require a 4-wheel drive vehicle for access. Depending on your itinerary, your Travel Exploration driver and guide could take you to the agadir of Anammet (near Igherm), Dou Tgadir (off the P1723 road) or Taguent (along the same road). On the Igherm-Tafraoute road (the R106), you can find igoudar at Issouka and Amane n Tazart.

Kasbah Tizourgane (on the Ait Baha alternative route between Taroudant and Tafraoute) is easily accessible. Situated on a hill in a low plain, this fortified village is being sensitively restored by descendents of the original three families who lived here. Using heritage funding and income from the on-site guest house, the communal areas such as the mosque and agadir are slowly being restored to give visitors a real insight into kasbah life. 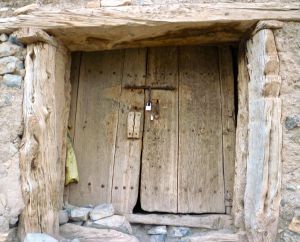 Many of the communal granaries have spiritual or religious connections. In the Ait Bouguemez Valley – further north in the High Atlas Mountains – the granary on a pyramid-shaped hill overlooking the valley marks the site of a former Jewish pilgrimage to the saint, Sidi Moussa. In the typical way that pre-Islamic beliefs permeate modern religious practices, the granary is said to offer fertility benefits to female visitors. The agadir is easy to reach and the guardian is happy to show visitors around the small museum to local mountain life inside.

If your itinerary in Morocco does not allow for an exploration of the igoudar in situ, the museums in Agadir (Museum Municipal du Patrimoine Amazigh) and Marrakech (the Berber Museum in the Majorelle Gardens) offer a great opportunity for an insight into Berber life. The museum in Agadir in particular has excellent exhibits of agadir keys plus jewelry and family documents found in igoudar, such as 18th and 19th century marriage certificates and wills. These were carved in wood or written on paper scrolls stored inside bamboo canes or leather pouches. The interesting aspect of these texts is that they are written in the local Berber dialect, Tashelhiyt, but using Arabic script (the Berber script being a modern invention).

So, the word agadir means both fortress and collective storage. If you visit the modern city of Agadir the evidence of its former fortress and Kasbah are long gone, destroyed by the earthquake of 1960, but you may have the opportunity to visit the original kind of agadir in its culturally rich Souss and Anti Atlas hinterland.

For more information about a Tour to Agadir or Berber Granaries