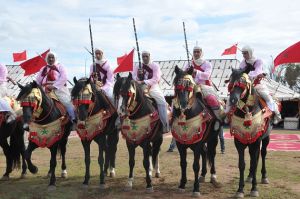 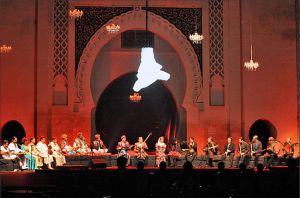 For more information about Morocco’s Festivals:

The Tan Tan Moussem: November – December. This is a traditional festival of nomadic tribes Check nearer the time for exact date.

Saffron festival in Taliouine: Octoer – November. Saffron is one of the most expensive spices and is also used for coloring. Talioune is the main centre for saffron production in Morocco.

The International El Jadida Horse Show October 2013.This show held under the patronage of King Mohammed VI celebrates the culture of the horse which is widespread in Morocco with many areas supporting their Fantasias or Tbourida teams at local Mouassems or saint’s days. It is also an important international event for blood stock and horse breeding and dressage .

The Erfoud Date Festival October 15 -31st. This festival celebrates the dates harvest in the Erfoud . Morocco has 100 different varieties of dates with 45 of those in the south of Morocco alone.

Eid al-Adha: October 15th – 31st: A sheep is sacrificed to celebrate Abraham’s preparing to sacrifice his son but being providentially spared on finding a ram caught in the branches of a tree nearby. It is a major family occasion in Morocco where those who can afford it slaughter a sheep which provides meat for days afterwards. On the eve of Eid al-Adha, the same day and the next, public and private companies do not work. The festival takes place two months and 10 days after the end of Ramadan. The celebration is called “Eid-el-Kebir”
Azalay Festival of African music in Ouarzazate, 1 – 30 November 2013

The Azalay Festival: Features African music of all styles: rock, jazz, blues, rap and salsa. There are Concerts, exhibitions and conferences.

Ras-el-Am or Muharram: November 5th.This is the first day of the Hejira, the Muslim New Year. The Muslim era began July 16 622 (or 20 September 622, according to some), the year of the Hegira. In November 2013, we are entering the year 1435 of the Hegira. The date of this New Year is based on the lunar calendar.

Anniversary of the Green March: November 6th.This celebrates the peaceful takeover of the Spanish colonial provinces in the Sahara by the Green March of civilians launched by King Hassan II in 1957 to liberate territory Morocco regarded as rightfully belonging to it.

Ashura in Morocco: November 13th – 14th. Ashura is celebrated on the 10th day after the day of the Muslim year (the 10th day of Muharram), the word for “ten”. The festival lasts for two days and you may hear volleys of firecrackers going of in the street. For days before small boys collect money for firecrackers not unlike Guy Fawkes day in England.

Independence Day in Morocco: November 18th. Morocco’s achieving independence from France in March 1956 and the triumphant return of a forced exile in 1955 of king Mohammed V. There are many official ceremonies held throughout Morocco.

Almond Blossom Festival Tafraoute: January 1 to February 28th.The almond trees usually bloom in January and February, and Tafraoute is filled with bright and vivid colors. The dates of the festival can change due to the climate .

Candle Procession in Sale, Rabat: January 13th – February 8th.On the eve of Mouloud, in honor of Sidi Abdellah Ben Hassoun, patron saint of the city and the barcassiers of Salé organize the procession of candles to the Saint’s mausoleum.

Ramadan June 28th – July 28th: Ramadan falls on the ninth month of the year of the Hegira, and is the month of fasting from dawn to dusk during which the Quran was revealed to the Prophet . The streets come alive at night as families and friends celebrate the breaking of the fast.

Lailat al-Qadr (Feast of the revelation of the Koran) July 24th.This is the Night of Destiny when the angel Gabriel came down to reveal the word of Allah to the Prophet Mohammed. The night of Lailat al Qadr is the holiest night of the year, a night of prayer and devotion.

Eid al-Saghir (Eid ul-Fitr) July 28th – 29th.The end of Ramadan is marked by the festival of breaking the fast and is a joyful family occasion when gifts are exchanged. Eid el Saghir is celebrated annually on the 1st of the month shawal, the month following the month of Ramadan. All shops and offices are closed.

For More Information about Festivals of Morocco

Traveling to Morocco During Ramadan