The film Casablanca in 1942 starred Humphrey Bogart, Ingrid Bergman, and Paul Henreid and features Claude Rains as the French police officer, Conrad Veidt, Sydney Greenstreet, Peter Lorre, and Dooley Wilson. All the scenes were shot in a Hollywood studio but the Moroccan street scenes are not too bad and the romantic drama won 3 Academy awards. The hero Humphrey Bogart has to choose between the woman he loves played by Ingrid Bergman and helping her husband in the Czech resistance escape the pro Hitler Vichy forces in Morocco. The picture accurately portrays the war time drama and the plight of refugees in Morocco during the Second World War and was rushed out to coincide with the Allied landings during operation Torch in North Africa in 1942. It is one of the great romantic films with some of the greatest cinema actors of all time. Casablanca still basks in the glory and today’s Rick’s Bar is well worth a visit, you can watch the film as well. 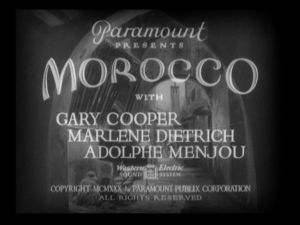 Josef Von Sternberg’s production of Morocco in 1930 with Marlene Dietrich and a very young Gary Cooper who is serving in the French Foreign Legion. The film opens with a legionnaire column marching into Mogador . The column stops in the souk and waits as the call to prayer rings out and the people pray, the scenes are very well observed. The shots of life as a legionnaire give an idea of what the period under the French Protectorate was like. This is the film where the young Marelene Dietrich caused a sensation by singing in the local nightclub in top hat and tails and kissing a woman who gave her a white rose after her performance. Both the heroine and hero have a troubled past and a are trying to found a new life in Morocco. It again explores the theme of Morocco as a land of eastern mystery where the characters can find themselves. In the end she follows the legionnaire column into the desert to be with her true love despite the wealth and security offered by another suitor.

The film Hideous Kinky came out in 1998 starring Kate Winslet and Said Taghamoui. In 1972 Jane’s two daughters Bea and Lucy move to Marrakech to escape the boring routines of London. The film captures the hippy period in Morocco. Both Kate Winslet ‘s character and her two daughter’s also go through a voyage of discovery aided by Said Taghamouti’s character who helps them to return to London.

The American novelist Paul Bowles narrates Bernado Bertolucci’s version of his great novel The Sheltering Sky starring Debra Winger and John Malkovich and Campbell Scott. As often happens the novelist did not like the film, the novel was perhaps too stark for a Hollywood extravaganza. There are great desert scenes and Paul Bowles appears in a cameo part as well as narrating the film. He spent 52 years living in Tangier writing and thinking about Morocco during his own personal journey of discovery. He was the best known American expatriate in Morocco of the period and introduced many writers of the period to the country.

If you search on Youtube you will find films of old Morocco in 1920,1930,and 1950’s and vivid street scenes and it is thrilling to see places as they were then and are now in modern Morocco. You can also find historic pictures of Mohammed V, Churchill and De Gaulle reviewing French troops in Marrakech during World War II as well as the historic Casablanca conference with President Roosevelt.

Morocco is a very photogenic country because of its string scenery and great films such as David Lean’s Lawrence of Arabia, Orson Welles’s Othello shot in Essaouira, Martin Scorsese’s, Kundun and also the Temptation of Christ. Many international films continue to be made in Morocco and Morocco has its own burgeoning film industry and film stars.