In the 1940s Moroccan female artists like Zohra El Fassia sang about the Jewish Moroccan experience, and in the 1970s Najat Aâtabou records addressed being a woman in Morocco and issues of infidelity. Today, the themes of female Moroccan musicians have shifted.

Political issues and daily challenges of the Moroccan female have become less apparent in the music. They have been replaced by pop music themes on love, betrayal, and relationships. These contemporary topics reflect the expanding presence of globalization and modernity in Moroccan culture. Moroccan females have felt these changes given their voices and lives are not being represented as they once were in modern Moroccan music.

During the past decade, Moroccan female rap group Tigress Flow led to the gradual emergence of new, female music that has been tackling societal issues. Although rap is traditionally recognized as a predominantly male industry, female rappers are embracing the platform and some are spreading messages about the importance of gender equality, freedom of expression, and politics. Unfortunately, there is still a lack of focus on some of the real Moroccan female challenges and many perpetuate western stereotypes about women’s bodies.

Taking freedom of expression a step further and turning the page highlighting bravery are female rap artists. A new group of young Moroccan females has emerged as DJs. While they do not sing lyrics, their freestyle performances, explosive beats, and energetic rhythms communicate that they have stories to tell and important messages to share.

Morocco Travel Blog went behind the scenes at the September 2019 Atlas Festival to discover the newest faces in Morocco’s female DJ and Electron Music Scene. Our interviews took place at Villa Janna Eco-Lodge, located in the heart of the Marrakech Palmerarie,

The 4 Moroccan Female Electronic Musicians Who Go Against the Grain are leading the way to a newfound contemporary sound.

Known in Parisian and Moroccan electronic music circles as GLITTER55, the Rabat born DJ is one to watch. Aspiring to create unique sounds and make an impact, the twenty-five-year-old musician masterfully blends Moroccan Chabbi sounds with Western techno. “I was listening to a lot of Arabic music… some songs and artists were completely forgotten.”

Manal’s talent likely stems from her early musical training. At the age of five, Manal was enrolled in the musical academy, the Conservatoire of the Royal Gendarmerie to learn solfege and singing. This prepared her to take a leading role in today’s music scene. Upon deciding to pursue a music career, opportunities quickly opened. She started by managing musicians, and then emerged as a DJ. In the beginning, her parent’s had a difficult time understanding her choices. “I explained to my mother that being a DJ is a job, good luck!” In spite of this Manal carried on and looked towards two of her idols for inspiration, one of them being her grandmother. Her grandmother inspired her fascination for freedom. “(My grandma) ran away at the age of 12 years, she wanted to get married…. she became independent, made a home, and during the French occupation, she even hid guns….she looked at the soldiers, right in the eye and said, “What? Do you want to see my breast?”

Manal also told Green Room France that Haja Hamdaouia, a Casablanca born singer, is another positive role model for her. The Chaabi songstress is well into her 80’s now and still continues to light up stages. She is known for creating a unique style of pop music, having a fierce personality, and her traditional outfits.  She sang for the king and the princes. When France occupied Morocco, she even wrote coded texts to guide activists from one place to another. She was imprisoned for killing her husband by breaking a bottle of whiskey on his head after learning that he had cheated on her with one of her singers.”

Manal’s talent has been recognized throughout Europe and Morocco. She has played on Rinse France, and at festivals with other strong female singers like Lebanon’s Hadi Zeidan. There are now more opportunities for these female artists to perform. The Atlas Electronic Festival is accompanied by other annual festivals that support innovation and female artists: September Oasis Festival in Marrakech and the October MOGA music festival in Essaouira. Prior to these festivals, electronic musicians could only play at rave parties and in secret. 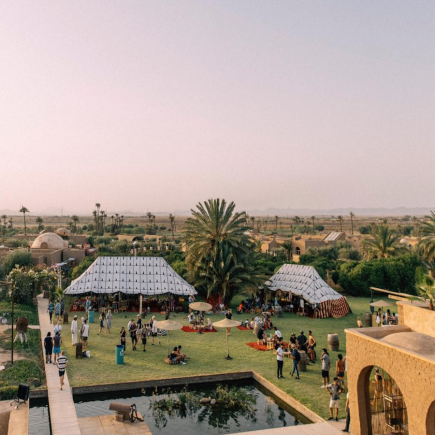 Another positive impact that festivals like Atlas have on the evolving electronic scene is that they bring in international musicians and create networking opportunities.

A DJ and event booker from Glasgow with Algerian, Senegalese, and Fes roots played at the Atlas Festival this September. She expressed that spinning tracks in her paternal grandfather’s country were not only exciting, but she also felt inspired by the amazing women playing base and hard music. “They are Moroccans living here. They are so young. The fact that they are able to build a strong scene and play techno is amazing. I’m already booking so many of them and bringing them to Glasgow.”

Beyond her Moroccan roots, Sarra expressed excitement to make a difference because she has been involved in creating opportunities for women. “Misogyny is definitely a thing. When I first started out there weren’t many of us around. In the beginning, the few women that were in my scene created free workshops to teach other women. We hosted panel talks to educate people. Everything grew from here. Today, you’ll get the odd situation where a female DJ will report feeling unwelcome, but it’s better now than three years ago.”

Every artist’s music carries messages. Sarra’s message is about acceptance. “Accepting people regardless of where they are from, what they look like, how they act, their mental health issues, being patient with people, and practicing kindness especially if they are different from you is what my music is about.”

A twenty-five-year-old DJ from Casablanca. By day she works as a digital marketing manager and by night she spins. Her innovative sounds are influenced by Hyperdub’s bass spectrum. Yasmean produces electronic music and brings innovative new sounds to Morocco. Her music steps outside of the traditional Moroccan sounds because she aims to speak to a wide international spectrum.

“I’ve never felt that I have to play a genre to express where I came from. Possibly, her confidence comes from having a supportive family. She started playing at 19 and although her parents were not against it they argued, “music does not pay the bills… long-term in Morocco. Unfortunately, this is a reality I accept.” Something else that has made a big difference in getting her messages and sounds globally recognized is the internet. “Social media is rising like never before… young people watch DJ streams, listen to Red Light Radio- stuff they would love to have here. When asked about obstacles to being a female DJ in Morocco, Yasmean stated that now, “It’s not a problem. People love that there are few women emerging in a mainly male-dominated scene. It’s an opportunity to rise.” Yasmean has performed in Amsterdam and curated mixes for Amsterdam’s Red Light Radio and Berlin Community Radio.

A young Afghanistan born DJ based in Heig. She recently visited Morocco for the first time to play at Atlas. In her sets, she incorporates Middle Eastern sound with percussion-based music. “I am inspired by DJ Plead and DJ Djrum. My sounds are rhythmic but without a lot of the heavy base that is in Western Culture. I also like to combine it with vogue and ballroom beats and Jersey Beats.” Her music touches upon club culture and then the intersection between cultures.

“I strive to make a balance between art and politics in my works, especially as a visual artist and in the music. That is why I like to bring in Middle Eastern Percussion works with the LGBT club culture. I like to show that it is possible and complementary to the sound. When asked about the most exciting thing about playing at Morocco’s Atlas Festival, she said “it is interesting because other festivals like the Amsterdam Dance Event, are predominantly male. It was inspiring to see this progressive step and forward-thinking.”

16 Moroccan Synagogues: Remnants of Jewish Life in the Imperial Cities and Great South