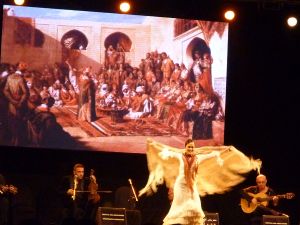 The Festival des Andalousies Atlantiques (Atlantic Andalucía Festival) celebrated in October 2014 its 11th year in Essaouira, on Morocco’s Southern Atlantic coast. It is now a well-established fixture in the annual schedule of this festival city, alongside the Gnaoua World Music Festival (which held its 17th edition in Essaouira – 2014) and the Printemps Musical des Alizés (the Spring chamber music festival initiated in 2000).

All three festivals celebrate the rich cultural diversity of Morocco and in particular the urban coexistence of different religious and ethnic groups in Essaouira (or Mogador, as it was once known). Despite its modest size, 19th century Mogador was Morocco’s foremost port. This was Sultan Sidi Mohammed Ben Abdullah’s strategic objective. He had created the kasbah (King’s Quarters) of Mogador to house his officials alongside the families of 10 Jewish merchants he invited to develop trade with Europe and the new world. European traders and consuls soon followed and the Sultan’s recognition of US independence in 1776 (the first head of state or government to do so) assured a significant market for the erstwhile ‘port of Timbuktu.’

Some of these prominent Jewish families – and the less wealthy families who followed them and found their home in the Mellah of Essaouira – were descendants of the Megorachim, who had fled the Iberian Peninsula at the end of the 15th century after the fall of Al-Andalus. They came to Mogador from cities such as Tangiers, Tetouan and Fes, where many exiles has settled. This cultural melting pot of Muslims, Jews and Christians, of Arabs, Berbers, Europeans and Africans, fuelled great intellectual and artistic collaboration. This is typified in the Andalusian style of music, which draws on Jewish, Arabic, Berber and Spanish influences.

The poster for the 2014 edition of the Essaouira Atlantic Andalucía Festival features French painter Eugène Delacroix’ work, ‘Jewish Musicians of Mogador’. Delacroix didn’t visit Mogador, but was present during the visit of a French delegation to the palace of Sultan Moulay Abd Er Rahman in Meknes in 1832. Wishing to present the best of his Empire, the Sultan brought an Andalusian style orchestra of Jewish and Muslim musicians from Mogador to play for the visitors. The 2014 festival presented a recreation (without the aid of any written records) of the piece which this group played for the Sultan’s guests almost 200 years ago. 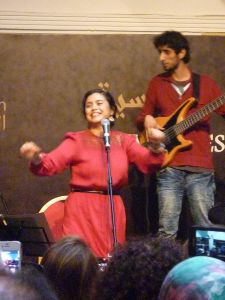 The annual Festival celebrates this common yet diverse heritage, as does the Conservatoire (Music School) of Essaouira, which today trains young musicians to preserve these rich traditions. The young artists, such as local talent Hicham Dinar Souiri, follow in the footsteps of great masters – some of whom, such as Abderrahim Souiri, (‘Souiri’ meaning ‘of Essaouira” and by extension its traditions), were on stage during the festival and who themselves have been influenced by the great names of the genre, such as Samy el Maghribi.

In 2014, Festival-goers were also treated to the great Andalusian Orchestra of Tetouan, directed by Amine Al Akrami; flamenco dance and song from Chekara Flamenca in collaboration with both Rabbi Haim Louk (a master of Moroccan Jewish liturgy) and Abir al Abed (lead vocalist with all-female group, Arige); and the modern ensemble of Neta Elkayam (a gorgeous, talented and energetic female singer of Moroccan origin based in Israel) and Maher Khalil Deeba (Palestinian singer and oud musician from East Jerusalem).

The significance of this Festival is not only in celebrating this past, but its contribution to a future in Morocco where inter-religious and intra-community tolerance and respect continues. As Mr André Azoulay, Patron of the Festival, Adviser to HRH King Mohammed VI and Jewish son of Mogador said on the occasion of the 2014 festival: “This story is not only written in the past.” Morocco lives these principles today – no more so than in Essaouira.