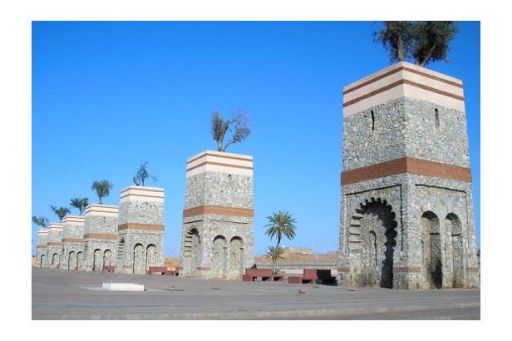 Marrakech has seven patron saints who were Sufi mystics and Islamic scholars who are said to look after the city. The Seven Saints  occupy an important place in the history, life and culture of the Marrakech. Each Saint has a zaouia (mausoleum) where pilgrims and those wishing for the help of the Saint or Sidi can pray at his tomb. The seven towers built in 2005 at Bab Doukkala, one of the historic medina’s entrances, are in memory of the Seven Saints.

The larger zaouias in Marrakech have mosques and they are charitable religious foundations who care for the sick, blind and crippled as well as orphans or the old and infirm. The spirit of charity is an important part of the role of the saints who were Sufi mystics and pilgrims give donations to the Zaouia. The concept of the Marrakech seven saints in Morocco predates Christianity and Islam and Cueta (or Sebta meaning seven), Jebel Hadid and Fez all have seven saints.

Marrakech has seven patron saints who were Sufi mystics and Islamic scholars who are said to look after the city.

The Alaouite Sultan Moulay Ismail (1672-1727) requested the Sufi scholar Abu Ali al Hassan to organize the Ziara or pilgrimage of the seven saints along more orthodox lines and establish or refurbish the zaouias.

This was to raise the spiritual level of Marrakech as a pilgrimage centre. At the time groups of Sufi mystics had begun to play an important role in jihad or the struggle against the Portuguese and Spanish and the bid to unify Morocco after tribal and dynastic struggles.  Moulay Ismail also wanted to ensure the orthodoxy of the devotions to saints. The cult of saints in Morocco has always been a subject of some controversy and unease in certain quarters as according to strict Islamic doctrine prayers should only be directed to Allah.  However, Morocco’s Malekite rite has its own variations and Sufism is well established.

The Seven Saints  occupy an important place in the history, life and culture of the Marrakech.

The Zaouia of of Sidi Bel Abbes is the largest in the Medina. Born in Sebta (Ceuta) in 1145 Sidi Bel Abbes came to Marrakech as a youngman having pursued religious studies from an early age. He settled in a cave on a hill near a source of water and became a hermit. He lived there for 40 years without ever entering the city but became famous as a preacher. Sultan  Yacoub El Mansour persuaded him to move into the city and provided him with a house and a madrassa where he could teach. He cared for the poor especially the crippled and the blind and the Zaouia carries on the work today. Sidi Bel Abbes died in 1205. The  Zaouia  of Sidi Bel Abbes is located 100m north of the Bab Taghzout. Non believers cannot enter but it is possible to catch glimpses of the large complex and its mosque.

Sidi Mohammed bin Suleiman Al Jazouli pursued his religious studies in Fez. He played a leading role in the Sufi brotherhoods who conducted jihad against the Portuguese and Spanish and he attracted thousands of devotees. He died in 1465 at Jazoula near Essaouira   His body was transferred to Marrakech. He is the author of the famous collection of prayers called Dala’il al- Khairat ( the paths of benefits ). This is a renowned work of Sufi mysticism. The Jazouli Zaouia was redesigned in the 18th Century and lies north of the Medina, near the Dar el Bacha.

Sidi Suheil  was born near Malaga and is known for his Sufi poetry and openness to new ideas at a time of strong religious orthodoxy. He was brought from Spain by Yacoub El Mansour. He wrote two masterpieces on the proper names of prophets mentioned in the Koran and a biography of Sidna Mohammed. He died in Marrakech in 1186. He is buried near Bab Rob . Students with memory problems are said to pray at his tomb.

Sidi Cadi Ayyad came from Ceuta or Sebta. He was the most famous scholar in Granada of the  Malikite rite in the Muslim West . With the advent of the Almoravids , he was  exiled in Tadla before moving to  Marrakech where he lived until his death in 1149. His book ” Al- Chifaa ” is renowned. He is buried in an old marabout near Bab Aylen.  Marrakech’s university is named after him.

Sidi Ben Abdallah El  Ghazouani  came from the Berber Ghomara tribe. He consolidated the Sufi revival initiated by Sidi Ben Slimane el Jazouli. After pursuing his studies in Fez and Granada ,he moved to Marrakech to complete his training under Sidi Abdelaziz Tabaa . He was imprisoned by the Wattasids and sent to Fez but he returned to Marrakech. He founded a Zaouia and died in 1528. He was buried near the Mouassine mosque.

Sidi Sidi Abdelaziz  Tebaa was a silk merchant in Fes who  became attracted to the spiritual life. He moved to Marrakech and was the chief disciple of Sidi Ben Slimane  el Jazouli and spread  Sufi  ethics  amongst the trade guilds in Marrakech  establishing an important link which remains to this day. He was buried near the Ben Youssef Mosque in 1508.

Sidi Youssef Ben Ali was of Yemeni origin, he was a brilliant student of Sheikh Ben Asfour in Marrakech. He suffered from leprosy and lived in the leper colony in Bab Aghmat. He was renowned for his patience and humility despite his suffering. He died in 1196. His mausoleum was built by the Saadian Sultan Moulay Abdallah . His  Zaouia  is located opposite Bab Aghmat. He  often recited a  poem : ” God dispels concerns, God spreads the light, God protects the weak God always forgives and everywhere God will not abandon you .”

For More Information on Marrakech Saints and Zaouias