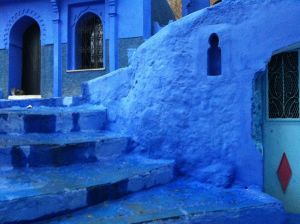 Chefchaouen lies inland from Tangier and Tetouan. Chefchaouen is a unique Moroccan city known for its blue and white washed medina walls that surround it. Filled with old world charm, a walk through Chefchaouen’s blue alleys  evokes being in a magical story book, similar to Aladdin and the magic lamp from One Thousand and One Nights. An early morning stroll through Chefchaouen’s  winding streets is a great to discover this Riffian town famous for fresh goat cheese, local crafts and peaceful setting.

Chefchaouen was originally a small fortress town founded by Moulay Ali Ben Moussa Ben Rached El Alami to resist the Portuguese expansion in Morocco. Built up by Jewish and Muslim occupants in 1471 Chefchaouen served as a refuge for those who fled Andalusia following the Reconquista led by the Catholic King Ferdinand and Queen Isabella.

When Spanish troops occupied Chefchaouen, or Chaouen,as the locals call it, in 1920 as part of the Spanish Protectorate in the north of Morocco, they found the population still speaking an archaic form of Catalan which they had brought with them centuries before. It was a closed city to Europeans until 1920 and was only visited in disguise at the risk of a european’s life. Charles de Foucauld and Walter Harris were amongst only 3 foreign visitors. Chefchaouen was returned to Morocco on its achieving independence in 1956.

Chefchaouen’s medina is a delightfully picturesque maze of streets and derbs leading to the Outa el-Hammam square and the restored kasbah. The grand 15th century Tarik Ben Ziad mosque has an octagonal minaret which was inspired by the Torre de Oro in Seville. It is part of the Andalusian influence on architecture found in the kasbah and its gardens in the heart of the medina. There is also a ruined Spanish replica of a mosque. 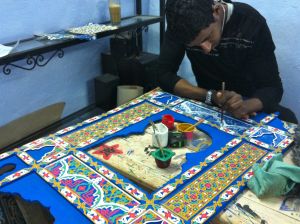 Chefchaouen’s main square in the medina is lined with cafes, craftsman, artists and weavers. Tourists can also visit the Kasbah near Plaza Outa el Hammam and the museum in the medina. Chefchaouen’s Kasbah was built by the legendary ruler Moulay Ismail and is surrounded by gardens. Inside the Kasbah, there is also a museum containing antique weapons, musical instruments, berber artifacts and photographs of the old medina. The town boasts a number of excellent restaurants as well as some many charming Moroccan Riads and boutique hotels.

Morocco travelers can visit souks where they can find local products which are special to the region such as woven wool garments and blankets ,carpets, djellabahs, wooden furniture, pottery and artifacts . 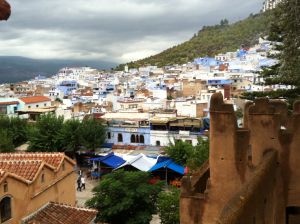 The area around Chefchaouen is a hashish and cannabis growing region as it is the only crop that can be grown in the mountainous region. This may also partly account for the relaxed ambiance and you may well be offered some of the local product but smoking cannabis remains illegal, so tourists must avoid it as Moroccan laws are very strict and the penalties severe.

The name “Chaouen” refers to the mountain which dominates the town and is said to resemble the horns of a goat. Climbing one of the surrounding mountains and trekking in the hills is a popular excursion. You can visit the Talassemtane Park and climb the region’s highest mountain Jebel Lakraa at 2,159 meters or visit the Bouhachem Park. For the adventurous there is the Kef Toghobeit Cave, nearly four kilometres long and over 700 metres deep, one of the deepest caves in Africa. There is also the Achkour cascade (waterfalls) and a natural bridge called locally “the Bridge of God” to visit.

Chefchaouen is a delightful and relaxing excursion from Fes and also a great place to visit on a Morocco tour en route from Rabat to Fes.

For More Information about a Chefchaouen Tour

Best Books to Read before Traveling to Morocco