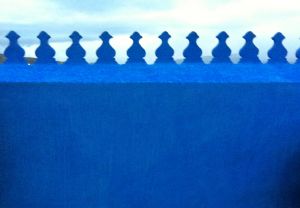 Chefchaouen is a small charming relaxed  city of about 40,000 inhabitants located in northeastern Morocco  close to Tangiers and Tetouan and the Spanish enclave of Ceuta. It can also be reached from Fes. Chefchaouen is unlike any other town in Morocco and has a laid back charm with buildings painted in many shades of blue in the 1930’s by Jewish refugees. Surrounded by mountains and towered over by twin peaks which give it is name, it is also called  Chaouen by locals.

The city of Chefchaouen was founded in 1471 by Sultan Moulay Ismail.It dominated the mercantile route between Tetouan and Fez and served as a base to counter the Portuguese in Ceuta. During the 15th and 17th century the city prospered and grew in considerable form with the arrival of the Moriscos and Jews who were expelled from Spain in 1494 during the Reconquista. The architecture of Chefchaouen  bears many echos of the Andalusian influence of the period. In 1920, the Spanish seized Chefchaouen to form part of Spanish Morocco.  They were surprised to find the inhabitants speaking a medieval form of Catalan. It was a closed city to Europeans until 1920 and was only visited  in disguise at the risk of one’s life. Charles de Foucauld and Walter Harris were amongst only 3 visitors. Spain returned the city after the independence of Morocco in 1956. 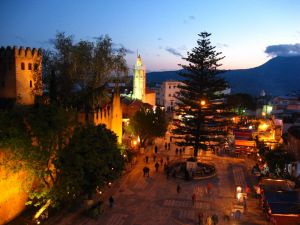 It is a delightfully peaceful city and laid back place with the small medina little more than a village. The buildings are painted blue (this was begun by Jewish refugees in 1930)which adds to the peaceful reflective nature of the environment. Visitors can while  away  the day visiting its souks  where local products especially woven wool and carpets, djellabahs and blankets , wooden furniture and artifacts special to the region  exploring the medina and the 15th Century Mosque, though non believers cannot enter and there is also a mosque dedicated to the patron saint of Northern Morocco’s Jebalah region, Moulay Abdeslam Ben Mchich Alami.   There is also a ruined Spanish replica of a mosque. The main square in the medina is lined with cafes and filled with locals and tourists  mingling easily. Tourists can also visit the Kasbah near Place Outa el Hammam and the museum in the medina. The Kasbah of Chefchaouen belongs to the early 18th century, and was built by the legendary ruler Moulay Ismail It is surrounded by gardens on the interior and exterior. Inside the Kasbah, there is  also the ethnographic museum containing antique weapons, musical instruments, berber artifacts and photographs of the old town.

Tourists can eat outside in one of the local restaurants . There are now a number of excellent restaurants as well as some two hundred hotels of different categories including some boutique riads offering high quality accommodation. After lunch one can go for a guided hike in the close-by green hillsides or for the more energetic climb the hills above Chefchaouen for a wonderful view of the city and surrounding area which is perfect for eco tourism. In the evening it is possible to relax in a hammam, a Moroccan spa experience.  For dinner,  the Restaurant Tissemlal, a beautifully decorated old house with a French-Moroccan set menu is amongst those highly recommended.

Chefchaouen  is a magical place for the traveler  to rest and reflect away from the frenetic activity found in Morocco’s main tourist centers of Marrakech and Fez.  Travellers continue their voyages refereshed and many stay longer than expected.

For More Information on Chefchaouen Tour