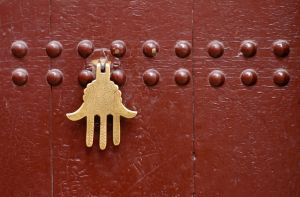 In the ancient medinas of Morocco old Riad doors have become much sought after items by tourists and collectors along with new riad owners. Riad doors are in particular famous for their unique architectural design and colors in Marrakech,Fes and Essaouira. Other Moroccan cities in the North such as Asiliah and Chefchaouen also have medinas with charming door knockers that standout against their rich blue doors and city backdrop color. In Marrakech these doors they can be found in antique door specialists, craft shops and at the Bab el Khemis or Thursday market by the northern medina gate.

Once a prized door has been negotiated and purchased, the adorning piece to complete it is an ornate brass knocker which in itself is now a sought after collector’s item created by skilled craftsmen in brass or wrought iron. Door knockers in Morocco are an important part of the character of the medina and a symbol of divine protection for the home. They are an important expression of Moroccan cultural traditions and symbolism. The first contact with the riad or house you are entering in the Medina is the brass knocker which you tap to gain entry, it’s a refreshing change from the world of door bells and entry phones.

Often the solid brass or caste iron knocker will take the palm shape of the Hand of Fatima often referred to as the figure five for the fingers and thumb of the right hand, Khamsa in Arabic. It commemorates the Prophet’s daughter Fatima Zahra and is believed to ward of the evil eye. It also appears in Levantine Christian mythology as the Hand of Mary and in the Jewish tradition the Hand of Miriam the sister of Moses and Aaron. The five fingers that appear on a Moroccan door knocker or a Khamsa refer to the  five books of the Torah to Jews, the Five Pillars of Islam for Sunni Muslims . The symbolism of May, (fifth month in the year and sacred to Mary for the Christians). The fingers of a Khamsa may point up or down. There are Jewish mellahs in all Morocco’s  medinas as Morocco had a sizeable Jewish population for centuries until the 1960’s and Essaouira’s Jewish community made up 40% of the total population in the early 19th century. Jewish symbols decorate the Mellah and Jewish craftsmen and artisans, particularly the silver jewelry have influenced Moroccan metal work for generations.

Morocco’s skilled craftsmen are renowned for their brass work and if you have a copy of a design you would like to use they can usually make it for you. Door knockers in Morocco’s magnificent royal palaces have also played their part in the exotic traditions of door knockers. Moroccan metal craftsmen in brass and caste iron  are a source of skilled invention drawing on ancient traditions and design which draw their inspiration from as far a filed as Damascus with its legendary metal work. Marrakech in particular is also the home of highly original Moroccan and European designers who blend ancient and modern.

Whilst there are very few articles on Moroccan door knockers they are on sale on the internet on a number of different websites  such as Tazi Designs in San Francisco which is a sure sign of their popularity.

For more information about Moroccan Tour Knockers or a Marrakech Tour