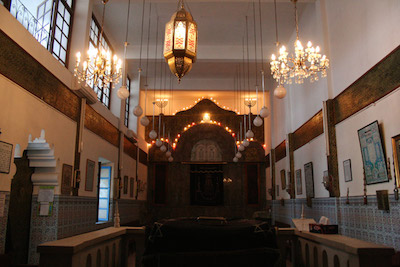 Morocco is a melting pot of Islamic and Jewish culture. Heritage Tours that are composed of Morocco’s grand history tell an important story about Jewish Morocco. Jewish Heritage Tours are comprised of a mixture of historic site seeing, shared experiences with the local community, prayer, guided visits to ancient landmarks, Moroccan Zaouias and delving into a country and a people that are hosptiable and kind.

Morocco’s history of Jewry and the co-mingling of Jews with Berbers and Arabs are a key factor in why Morocco is ideal for Jewish Travelers today. Morocco is a country of Muslims, Jews and Christians. Jews first arrived in Morocco during pre-Christian times, accompanying the Phoenicians on their trade expeditions across the coast of Morocco. In the countryside Jewish and Berber tribes tilled the soil side by side together for two thousand years speaking the Berber dialect. In the towns and cities Jewish merchants and financiers were valued by successive Moroccan rulers who protected them.

Today, a journey through Morocco’s most private Jewish and public heritage sites offers places sacred spaces to discover that have left an indelible mark on Moroccan Jewry. Expert licensed Historical guides will impart history and information in great detail that tells a story of Moroccan Jewish culture and heritage. The history and stories of Jewish Morocco lie within the anicent cities (medinas) along with Berber rural regions. These guided story tellers are what keep those memories alive today.

Jewish Heritage Tours – The Stories of Morocco Reside Within

The Museum of Moroccan Judaism of Casablanca is a museum of history and ethnography, created by the Jewish Community of Casablanca in 1997 with the support of the Foundation of Jewish-Moroccan Cultural Heritage. The Jewish Museum in Casablanca is tucked into a residential neighborhood and holds a treasure trove with it being the Arab region’s only Jewish Museum. It uses world-class standards of conservation for its national and international collections. The Museum of Moroccan Judaism presents religious, ethnographic and artistic objects that demonstrate the history, religion, traditions and daily life of Jews in the context of Moroccan civilization.

Casablanca’s Jewish Cemetery:  The Jewish cemetery in the mellah is open and quiet, with well-kept white stone markers in French, Hebrew and Spanish. Once a year, Casablancans celebrate a hiloula, or prayer festival, at the tomb of the Jewish saint, Eliahou.

Temple Beth-El: the Jewish Synagogue in Casablanca. Beth-El, is considered the center piece of a once vibrant Jewish community. Its stained glass windows and other artistic elements, is what attracts tourists to this synagogue.

The Jewish mellah of Casablanca is young by Moroccan standards, not much more than a century old. It assaults the senses in the evening, with a sea of women in brightly colored djellabahs carrying and selling fruit and vegetables throughout the cramped, narrow streets. While Jews no longer live in the mellah, kosher butchers are found in the old market, next to other butchers selling horse meat. The Jewish cemetery in the mellah is open and quiet, with well-kept white stone markers in French, Hebrew and Spanish. Once a year, Casablancans celebrate a hiloula, or prayer festival, at the tomb of the Jewish saint, Eliahou.

The Jewish Mellah: In contrast with the young Mellah of Casablanca, the mellah of Fes is over 650 years old. This picturesque neighborhood adjoins the royal palace, noted for its recently constructed bright brass doors. Jews took shelter in this palace during the 1912 pogrom.

The Jewish Cemetery: The nearby cemetery contains the tombs of more Jewish saints than any other cemetery in Morocco. One of the more important saints is Lalla Solica, who was killed for refusing to convert to Islam. This woman was born in Tangier in 1817. At the age of 16, she was courted by a Muslim man, but refused to marry him.

Maimonides: Throughout the old city of Fes, there are traces of ancient Jewish life, including the home of Maimonides, who lived in the city from 1159-1165. Suffering from the persecutions of the Almohad dynasty, Maimonides emigrated to escape forced conversion.

The Danan Synagogue: The Danan synagogue was once only one of several inside the walls of Fes, and not the most elaborate. It is entered through a simple doorway indistinguishable from the doors of nearby houses. The door leads immediately to a short flight of stairs that lead into the high, rectangular space of the synagogue. The construction is masonry coated with plaster. The wooden ceiling is beamed and painted. The room is lit by small windows high in the walls. Photos taken in 1954 show a ceiling hung with numerous memorial lamps, now vanished. The walls are wainscotted with blue figured Moroccan tiles. The large Torah Art, a cupboard filling the width of an entire wall, is made of carved wood. The wall above is decorated with intricately carved plaster work. Opposite the Torah Ark is a raised alcove, separated from the main prayer space by a wooden screen elaborately carved with a series

Meknes Jewish Heritage Sites:
The Talmud Torah Synagogue was built in 1930. This is the last remaining synagogue in Meknes, often referred to as the Moroccan Versailles, home of the former Sultan’s palace and grounds.

Marrakech Jewish Heritage Sites:
The Marrakech Synagogue in the Jewish Mellah was created in 1558. The Jewish community enjoyed autonomy even though Jews weren’t allowed to own any property outside the Mellah and controlled the sugar trade. There are approximately 250 Jews still living in Marrakech, and most live outside the Medina. The Mellah area is now almost completely Muslim.

The Essaouira Jewish Cemetery: Essaouira was founded in 1765. The oldest tombs date from 1776. Contrary to Jewish tradition and Mosaic Law, the tombs are sculptured with very marked human forms. These anthropomorphic tombstones sometimes bear epigraphic inscriptions and sometimes none. The monolithic tombstones are carved out of marine sandstone. This kind of tombstone can be found in other Moroccan towns located mainly on the Atlantic and Mediterranean coasts. In some towns such as Xauen (Tetouan) certain tombs have been dated to the 16th century. Inscriptions are in Hebrew and French. The local Jewish community owns the site. The sea is adjacent to the cemetery.

The Essaouira Mellah covers over 10 percent of the town, but Jews constituted almost 40 percent of the population in the late 1880’s. Jewish stars on the doors to the mellah show the degree to which Jews were accepted in Essaouira, to the point that some of the richer Jews did not even live in the mellah. Commemorative plaques indicate the buildings in which synagogues were located. Former inhabitants of Essaouira, most of them Jewish, formed a committee to rehabilitate the town. An important member of the committee is King Hassan II’s Economic Advisor, Andre Azoulay. The Jewish cemetery, just outside the city gates, is extremely well kept. The hiloula of Chaim Pinto is held in September.” Rabbi Chaim Pinto is buried there.

Jewish Zaouia – Sacred Space:
In Ourigane there is the Jewish, Berber Shrine of Rabbi Mordekhai & Rabbi Abraham Ben Hammou. In Ourigane, just outside the National Park, is an old Jewish Zaouia (shrine of Rabbi Mordekhai and Rabbi Abraham Ben Hammou. There is an old dirt road that leads to a compound of buildings enclosed by a gate, overshadowed by mountains and built on rocky terrain in the village of Ouirgane. Inside the shrine are three different tombs, leaving the precise burial spot of Rabbi Haim Ben Diwan in doubt — befitting the mysterious circumstances of his death.

Visiting Morocco: Things to Know Before You Go

Discovering Marrakech’s Jewish Heritage: Synagogues and Stories of the Mellah