In cities and rural regions, Moroccans can be spotted daily eating comfort foods. Traditionally, Moroccans eat three meals a day, with lunchtime remaining the most important as all family members still come home from school or work to eat together. Each of these meals is typically homemade and include a variety of types of mouthwatering foods that are hearty.
Being at the crossroads of many civilizations, Moroccan cuisine is a crisscross of Arab, Berber, Moorish, French, Middle Eastern, Mediterranean African, Iberian, and Jewish influences.
Moroccan cooking is enhanced with fruits, dried and fresh — apricots, dates, figs, and raisins, to name a few. Preserved lemons bring a unique face to Moroccan chicken and pigeon dishes. Nuts are prominent; pine nuts, almonds, and pistachios show up in all sorts savory and sweets such as Briouats and Chebakia. Moroccan sweets are rich and dense confections of cinnamon, almond, and fruit perfumes. The cooks in the royal kitchens of the Imperial cities refined Moroccan cuisine over the centuries and created the basis for what is known as Moroccan cuisine today. Moroccan cuisine tends to be heavy and spices are used extensively.

Do you know what the 7 Mouthwatering Comfort Foods in Morocco you must try are?

Pastilla / pigeon pie) Pigeon, chicken or fish  If you love the mix of Sweet and salty flavors taking pastilla (bastilla) also known as pigeon pie is a must. It is flaky and traditionally made with pigeon. Today Bastilla is more commonly made with chicken or fish. It is even offered as a vegetarian option by the majority of restaurants in Morocco.

A Moroccan Tanjia is named after the clay pot that it’s cooked within. It’s traditionally filled with chunks of lamb and beef, and its rich flavor comes from the variety of traditional Moroccan spices and preserved fruits it is cooked with. Nestled in the Tangia clay urn are garlic, lemon, cumin, salt, turmeric and smen (Moroccan butter, similar to ghee). The Tangia is then slow cooked in its terracotta pot within the embers of a Hammam furnace for 24 hours. Tangia is a traditional Marrakech hearty dish with full flavor that many refer to as a meat lovers dream.

Msemen – also known as rghaif – or meloui are Moroccan pancakes that have been folded into a square shape before being fried in a pan. Traditional msemen is made plane and then piled with butter, jam or another topping of choice. During holidays such as Ramadan, msemen is offered stuffed with chicken, noodles or lamb with spices. Some refer to this as Bouzrain, similar to stuffed Berber bread.  This is a recipe for the dough used to make msemen. The dough is kneaded like bread dough until soft and smooth.

Couscous one of Morocco’s most famous dishes. It is typically served with meat or vegetable stew. Traditionally couscous is prepared on the Muslim holy day (Friday) and for special occasions, however, in Berber villages and mountain regions, it is a daily staple and prepared for dinner. Couscous can be found at most restaurants and cafes.

Commonly served during breakfast, originating from the blue pearl city of Chefchaouen, Bissara is a rich and hearty soup made from dried fava beans. Typically it will is topped with fresh olive oil and a sprinkle of cumin. Bissara is thick similar to a dip. Additional ingredients that can for those who would like to add more flavor are garlic,  lemon juice, hot red pepper, and salt. Bissara is typically served in small bowls that are shallow or deep plates. It originated in Pharaonic Egypt and is eaten there for breakfast as a dip with bread.

You can’t leave Morocco without tasting the mouthwatering sweet or savory puff pastry called the Briouat. A Briouat is a deep fried filo pastry in the shape of a triangle. Moroccan Briouats are filled with primary meat (chicken or lamb) and flavored with spices or lemon and pepper. Today there are many varieties offered for that include filling such as cheese, vegetables or fish. Briouats are also eaten as a desert and can be filled with sweet almond or peanut paste, fried, then dipped in warm honey flavored with orange blossom water. 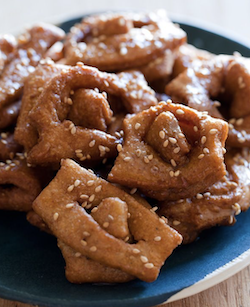 A delicious dessert, Chebakia is a flower-shaped, sesame cookie dipped in honey. It is made of thin strips of dough that are rolled to resemble a rose, then it is deep-fried until golden, and coated with a syrup of honey and rosewater. It is then sprinkled with sesame seeds. Typically eaten during Ramadan Iftar (breakfast) this sticky, sweet dessert is a classic. You will typically find bees all over Chebakia in the markets.